In the last few years, there have been many Marmite-based collaborations including Houmous, Peanut butter, and now Marmite Ale.

Camden Town Brewery’s standard lagers and ales are vegan-friendly as they don’t use any fining processes however, some special editions may contain lactose due to using a different brewing style so always check the label.

Camden Town Brewery officially began in 2010 and currently produce a wide variety of lagers and ales including a variety of IPA’s.

The brewery has confirmed in replies on social media that the new Marmite variety is in fact vegan.

Love Hate Ale will be available as packs of 4 330ml cans and will be launched for a limited time only so you may need to be quick to give this one a try.

You can visit the Camden Town Brewery Beer Hall at 55 Wilkin Street Mews, NW5 3NN or order online at http://www.shop.camdentownbrewery.com from the 9th of September. 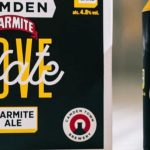