Maryland sugar-free cookies are classed as accidentally vegan, as in they have no animal ingredients but are not labelled or marketed as a vegan product however the new product is packaged as vegan.

The new product is clearly labelled vegan on the front packaging and spotted at a modest price of 69p.

Maryland cookies, a brand of Burton’s Biscuits, are one of the leading producers of cookie style biscuits. Burton’s are the company behind Jammie Dodgers who also changed the recipe last year to become vegan-friendly.

Many biscuits are classed as accidentally vegan such as many bourbon biscuit brands, some filled wafers, Tesco Dark Chocolate Digestives and Oreo’s.

Hill Biscuits, established in 1855, also produce vegan-friendly cream biscuits in Chocolate, Orange, Lemon and Chocolate Orange flavours. All are available in 150g packs and are often included in multibuy deals. Although the Strawberry and Custard versions are not suitable.

You can find your nearest Home Bargains store with the following link: http://www.storelocator.homebargains.co.uk 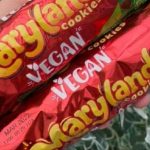