Freya (19) has been a member of the Vegan Food UK group for around a year and regularly posts pictures of her cakes and bakes throughout her time in the group.

The youngest of this year’s contestants, Freya tells us that she has been vegan for nearly two years and in her post today said ‘I am so passionate about ethics and feel completely blessed to have the opportunity to share this with the world’.

Freya announced her news in the group today, ‘To say I am the first completely vegan baker on GBBO feels like such an honour’. She also confirmed in the post that all her bakes will be vegan, ‘I can’t believe I’m actually writing a post announcing I am going to be on THE GREAT BRITISH BAKE OFF 2021 baking all-vegan bakes!!!’

Her previous vegan bakes include a variety of celebration cakes, eclairs and biscuits.

Season 9 of the show saw a vegan week added to the classic format in which contestants had to bake a variety of goods including a savoury pastry, a technical bake, and a showstopper.

The show returns to screens for its 12th series on 21st September at 8 pm and is aired on channel 4 so set to record if you don’t want to miss it. It will also be available on Netflix for those in the US from Friday 24th September.

Matt Lucus, Noel Fielding, Paul Hollywood, and Prue Leith all return to the show in this series which like series 11 was filmed in a bubble due to lockdowns and other COVID restrictions.

The team here at Vegan Food UK will be cheering Freya on as she faces whatever challenges the show presents and we can’t wait to see how she adapts the recipes into their vegan versions. 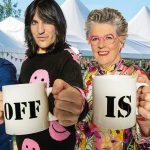