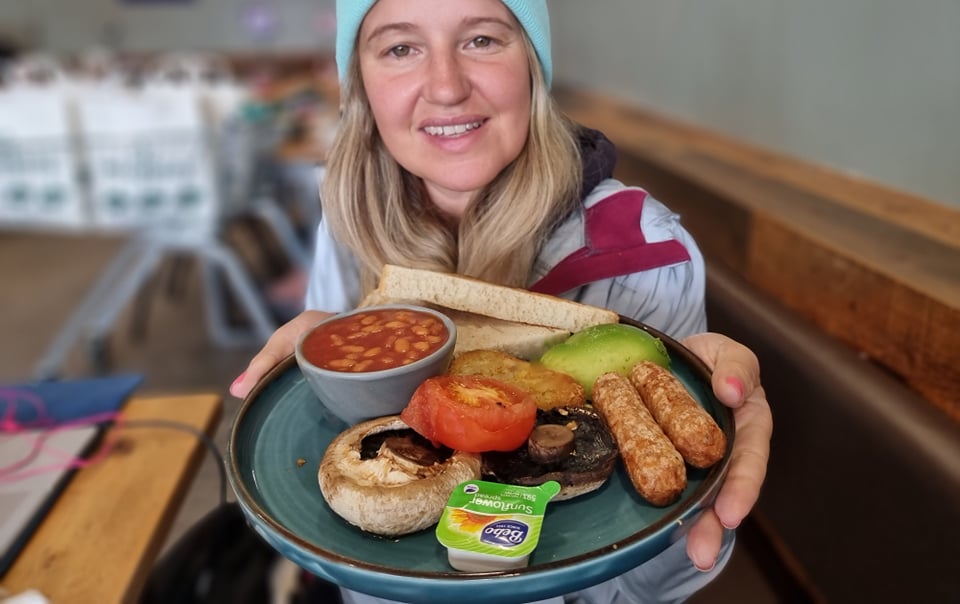 Is this currently the cheapest vegan cooked breakfast in the country?  We think so!

Morrisons Cafe have launched a four-week, half-price breakfast bonanza, and the vegan options are also included in it.

Starting on 30 August and running through to 26 September, vegans can join in on the fill-your-boots Morrisons breakfast campaign

Down from £5.50, the full vegan breakfast currently costs £2.75 and the offer is on all day usually from 8am-6pm (but timings vary from store to store).

We do our best to support vegan cafes whenever we can, but sometimes there just aren’t any around when you need one. So Morrisons Cafe has done us proud on more than one occasion.

On hearing this news, we rushed down to the nearest Morrisons Cafe to see what the plant-based breakfast was like for less than three quid.

The Morrisons Cafe we attended was in Weymouth, and we arrived to what can only be described as pandemonium.

Word is officially out about the breakfast, that combined with it being a drizzly day made it pure mayhem – and apparently it has been like it since the start of the half-price offer.

I ordered the Full Vegan and Janine ordered avocado on sourdough (not on the offer). The breakfast came out after about a thirty-minute wait, on a large plate full of food. We were amazed to see so much tucker for the money we paid.

On the plate were two vegan sausages (not sure which ones), two flat cap mushrooms, a  hashbrown, half an avocado, a pot of baked beans, two half slices of toast and a small tub of dairy-free butter.

All in all, it was a tasty breakfast and it wasn’t swimming in grease & oil.  It was definitely worth the money, even at the full price. We were fortunate enough to be at a Morrisons with a barista kiosk too, so we also got a Super Green Smoothie for £2.25 – and it was fresh & delicious. 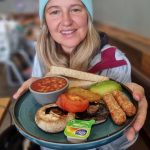