Customers of Aldi will be able to pre-order the festive hampers, which sold out last year, from the 27th of September.

The Vegan Hamper (£29.99) includes a selection of festive plant-based goodies such as a Free From Christmas Pudding, Vegan Cookies, Moser Roth Vegan Salted Caramel Truffles, and a bottle of vegan wine.

The company have continually added to their vegan range, Plant Menu, throughout the year with a variety of items from frozen goods to sweet treats. The ongoing growth of the range and the recent announcement of the return of the hamper leave fans of the supermarket chain hopeful for another good year of vegan-friendly festive options.

The Vegan Hamper will be available to pre-order online only from September the 27th.

The Top 6 UK Supermarkets For Vegan Food
We Went To Norwich's First Vegan Döner Kebab Shop, And This Is What We Thought... 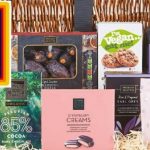