Recent research shows that vegan diets are just as good for cats and dogs as a meat-based diet.

The research by Andrew Knight, a veterinary professor at the University of Winchester comes in the wake of recent articles that suggested dog owners could face hefty fines if they fed their dogs a vegetarian diet under the Animal Welfare Act 2006.

Cats in particular need several proteins and amino acids in their diet such as taurine. Knight said that these were typically degraded in highly processed pet food and needed to be added back synthetically. Prof Knight also said his research showed that cats and dogs had as good, or better, health outcomes on plant-based diets as they did when fed on meat pet foods, provided these were carefully formulated with additional synthetic nutrients.

A previous study by Ontario Veterinary College, part of the University of Guelph, published in BMC Veterinary Research, showed that cats in the study group thrived on a plant-based diet and had better body condition than those fed meat.

Knight discussed the previous study in vet times stating that: “The combined results of this growing evidence base indicate that cats and dogs maintained on nutritionally sound vegan diets suffer no adverse health consequences, and may experience certain benefits, such as reduced obesity, GI and hepatic disease in cats.”

Dog food company OMNI, the UK’s first plant-based dog food brand, states on their website that their products are 100% nutritionally complete and vet formulated & approved. Their founder Dr Guy Sandelowsky is quoted on the site as saying that “A scientifically formulated plant-based diet can offer dogs healthier, cleaner ingredients that are also better for the planet”

Mintel market research company recently showed that 34% of dog owners are interested in feeding their pets a plant-based diet.

Despite these recent findings the president of the British Veterinary Association, Justine Shotton still warns against adopting a vegan diet for your pets.

“We would not recommend feeding a dog a vegan diet as it is much easier to get the balance of nutrients wrong than to get it right, leading to a risk of dietary deficiencies and associated disease”.

She also added that any changes to pet diets “should only be undertaken under advice of a vet with in-depth nutritional knowledge”.

Would you consider feeding your pet a vegan diet or do you currently? Check out Vegan Food UK on social media and join the discussion. 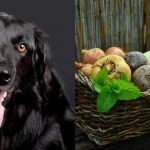