Bags of vegan marshmallows have been spotted in Costa Coffee and posted on social media.

The popular coffee chain, Costa appears to have received the vegan marshmallows in some UK outlets. This has led to speculation online as to whether they plan to launch a vegan hot chocolate this year, hopefully, complete with vegan whip.

Vegan Food UK shared the pictures on Instagram earlier today and followers of the page are certainly excited at the prospect of a vegan hot chocolate launching soon.

One user commented “This will make winter so much better” and another said, “I hope they do a vegan hot chocolate. I’m desperate for a decent hot chocolate”.

Costa currently offers a range of coffees including lattes, cortado, flats, and chai that can be made vegan as well as a range of teas and iced drinks. They have the choice of soya, oat, coconut or almond milk alternatives.

Costa has increased their vegan options throughout the year with launches of a variety of snacks including the recently launched Bac’n Bap as part of their Autumn menu.

Follow Vegan Food UK on social media to stay up to date on the most recent vegan launches UK wide. 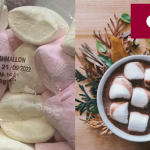