The popular Japanese inspired Asian food outlets have always had a vast vegan menu and with the announcement of further dishes, they are now the first high street restaurant to give an equal share to their plant-based choices.

Wagamama pledged to make half the menu plant-based as part of their ‘2021 Positive Action Plan’ and have reached that commitment goal three months early with the launch of today’s menu.

Wagamama’s first opened its doors in London in 1992 and since then has been a trailblazer for vegan foods. With previous collaborations with high profile vegan chefs such as Gaz Oakley of Avent Garde Vegan and companies such as Club Cultured, London’s only tempeh factory.

The new items are:

With a new pulled ‘chicken’ alternative inside a classic steamed bun.

Made from mushroom and soya in a sweet and spicy sticky sauce. Served with ramen noodles, roasted bok choi, spring onion, chilli, coriander, sesame seeds, all in a vegetable broth.

The new items join classic vegan favourites such as the Vegatsu, No Duck Donburi, Yasai Yaki Soba, and their Bang Bang Cauliflower.

Wagamama is also leading an incentive to encourage more patrons to choose a plant-based option ahead of the COP26 conference on climate change on November the 1st. Their ‘Plant-Pledge’ campaign offers customers a vegan side to help kick off their plant-based food journey and just under 8000 guests have already made their pledge.

Wagamama CEO Thomas Heier said ‘This menu launch marks an important moment for us as a business, as we officially make our menu 50% plant-based. We’ve been making choices, both big and small, to tread more lightly on our earth.’

“We’re privileged to have restaurants in most major UK cities, therefore feel a real responsibility and exciting opportunity to make plant-based food as accessible as possible to all guests no matter their dietary preferences.”

“We feel passionately that plant-based food can be just as nourishing and delicious. We hope our new menu will influence a positive spike in plant-based menu participation from our guests.”

Planning on checking out the new items? You can find your nearest Wagamama restaurant here: Find the nearest wagamama location near you 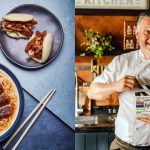