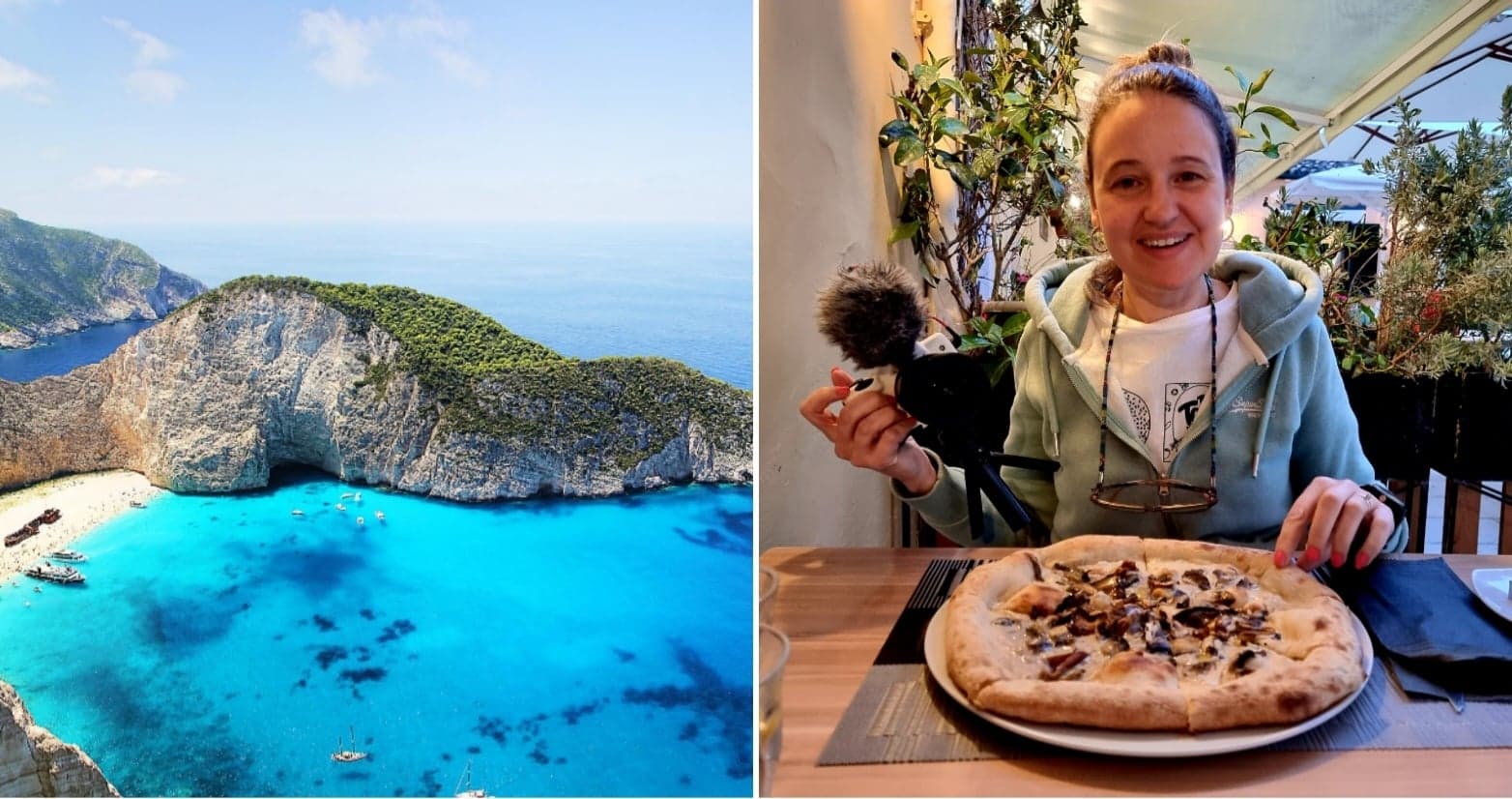 It’s not all crystal clear waters and friendly locals, you can also find delicious plant-based food if you look hard enough

Our travels to foreign lands are mostly taken up with finding vegan food, but it’s something we love! Greece is no exception, as there are so many plant-based gems to find there.

Just remember, apart from seafood and meat, Greeks love feta cheese and honey, so be careful! Below is a list of foods we found on the island of Corfu on a 10 day trip, but they aren’t exclusively vegan

It’s probably the most famous of all Greek food, but how easy is it to find a vegan version? The answer is VERY easy! But the hard part is finding somewhere that does dairy-free Feta also.

Almost every taverna worth its salt will serve their version of a Greek Salad: lettuce, tomatoes, onions, olives, cucumber, and feta dressed in oregano and oil. You can ask for it without Feta everywhere and they will oblige, but unfortunately will probably charge you the same price as if it has feta.

Our opinion is that fresh produce in Greece is worth eating, even without cheese! They have the BEST tomatoes and often are extremely fresh, plus fresh olives and oil, bit of bread and you are laughing.

Commonly associated with cheese, this dish can actually be vegan, let us explain. Saganaki actually refers to the frying pan in which the food is cooked BUT is often a fried dish, so be careful.

The reason why we add it to the list here is because we had separate mushroom and aubergine saganaki in Greece, and it was so good that we went back the next day to eat it again.

It has the look and feels of the best curry you have ever eaten, but with Greek spices instead of Indian. To be fair, it was absolutely swimming in olive oil, but then again you are eating it without cheese, so once in a while is ok. We could even taste some ouzo notes in there, which was delicious.

If you come across saganaki in Greece, definitely enquire as to what it is. They may turn round and say “it’s a cheese dish” or what we have described “topped with cheese” – the latter you can ask them not to add any cheese.

Follow Part One of our Corfu Food Tour Below

Reluctant to order this, as we feel you can definitely get sick of aubergine if you eat it too much, but we are so glad that we did!

Imam is baked aubergine, stuffed with tomatoes, onion and garlic. The desired effect of Imam is a beautifully soft aubergine (or slithers of aubergine) that almost turns into a pasta/spaghetti.

We found the dish very rich, and just perfect scooped up with bread. Another one of our favourite dishes from Greece.

On almost every menu in Greece are Gigantes aka GIANT Butterbeans! The beans are huge, and the dish wouldn’t be the same if they were small. They are baked/cooked in a rich tomatoey, garlic sauce, and are a much needed protein hit for any vegan Greek traveller.

Gigantes Plaki will become a staple for you in Greece, it’s fairly cheap and you can eat it any time of the day. If the local cafe has no vegan breakfast options, ask for Gigantes on Toast (yes beans on toast, but delicious).

Greece is obviously the place to come to if you like olives, and almost always come in a bowl before a meal and are dark in colour, and unpitted. Finding the taverna with the freshest olives can be a great quest.

It’s a classic and simple starter, and beats bread & butter hands down. A basket of bread can be found everywhere and costs less than 1.50 Euros usually.

Briam actually translates to roasted vegetables, but it can come in many forms in Greece. And it’s such a strange sounding name for a meal, sounds more like an item as opposed to a whole dish of food.

The last time we ate Briam it actually came out as a bowl of oily, chunky vegetable soup – but it was delicious. Once again, fairly cheap and easy for a taverna to knock up.

Filo pastry is used a lot in Greek food, and the spinach pie (usually comes with Feta cheese) is no exception.

Occasionally you find it without feta, and sometimes you can be lucky enough for them to make it fresh without the cheese.

This was a real find, and one you have to get real lucky to find: a vegan cheese pie/pastry! Korou refers to an incredible unleavened filo pastry (usually made with butter & yoghurt). It is so soft and so crumbly, you will never forget it.

Almost always are vegan, and the perfect starter! If you didn’t already know they are grape vine leaves stuffed with rice.

You usually get five or 6 on a plate at room temperature, but double check they haven’t done something crazy and added seafood to them.

We got served this by a local who was also vegan, but just for lent. It was beautifully cooked artichokes in a rich gravy – incredible with bread!

Admittedly something that reminds us of ‘the only vegan option on the menu’ from back in the day, but the Greek’s do this dish so well. The veg is usually peppers, but can be tomatoes too, and stuffed with rice and Greek spices.

Vegetables in Greece in our opinion have a lot more flavour than here due to their climate & sunshine, so any vegetable based dish is always the best choice.

These mostly came as a massive plate of almost like tempura veg, but a bit doughier. You need to find something to dip them in, or alternatively nice with a salad.

Baklava and Other Greek Sweets

For anyone who hasn’t had baklava before, it’s literally filo pastry, nuts & syrup – it’s absolutely delicious.

The Greek’s seemed to be pretty good with knowing what doesn’t have honey, milk or eggs, so don’t ne afraid to ask. We also found accidentally vegan baklava in mini supermarkets by tourist beaches.

We saw and ate Greek pancakes twice, and they were fantastic. More like doughnuts that pancakes, as they come in these little deep fried balls. From what we were told, they were just flour, yeast sugar and oil.

We actually found decent vegan milk chocolate at a number of small island supermarkets: you know the ones that sell cold beer & snacks. The dairy-free chocolate came in two varieties: almond or hazelnut (almond was our favourite).

Plant milk was easy to find everywhere, including mini supermarkets and almost all cafes had almond milk or soya for coffees & teas.

Believe it or not, we found blocks of vegan cheese in the majority of mini supermarkets…but unfortunately no vegan feta (although large supermarkets almost definitely will stock it). 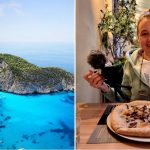