This week saw loads of new vegan-friendly products from several coffee chains, brands, and supermarkets across the UK.

Those preparing for the festive season were in luck this week with several new Christmas ranges and pumpkin spice fans saw the return of the autumn flavour to Starbucks.

Nomo’s advent calendar was also seen in Sainsbury’s,  The advent calendar features 12 caramel and salt and 12 creamy chocolates. Nomo has also brought out a chocolate reindeer with a cookie dough centre (£1) in a similar style to the non-vegan Malteser reindeer by Mars.

For those excited for pumpkin spice, Starbucks launched a pumpkin spiced vegan cookie (£1.59) topped with pumpkin seeds and cranberry as well as the return of the classic pumpkin-spiced drinks (from £3.55).

Starbucks and Costa added some new savoury snacks to their menu’s with Costa bringing out the Bac’n Breakfast Bap (£3) made with Finnebrouge naked without the oink bacon style rashers and Starbucks adding the No’meatball Marinara Wrap (from £4.20) to the menu.

Paxo, the brand known for its stuffing mixes, launched Veggie Fillers stuffing mixes back in June. The plant-based mix is designed to stuff vegetables such as peppers and mushrooms. Labelled vegan and available in Sundried Tomato & Oregano and Spicy Mediterranean. Originally launched into Waitrose, they are now also available in Sainsbury’s.

Quorn announced this week that new vegan sausages will be available later this month in Asda, Waitrose and Tesco. The Brilliant Bangers are the first vegan sausage by the company since they discontinued the popular Cumberland Sausages. 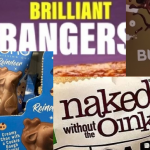