A great lineup of launches this week from vegan bacon rolls to chocolate treats.

The announcement of the McPlant dominated this week’s new vegan food news however there were several other releases you may have missed.

Buttermilk Plant-Powered Caramel Nougat bar. Launched this week into W H Smith, Holland & Barrett and Sainsbury’s, the bar is being compared to the Mars product Milky Way.
Priced at £1.50 it is definitely one for chocolate fans to check out.

Check out their dairy-free range at:  http://www.buttermilk.co.uk/collections/dairy-free/vegan

Taste & Glory Deli Slices
The rebrand of Naked Glory has launched 3 flavours of deli slice alternatives. No-Beef, No-Chicken, and No-Ham slices are available in Waitrose at £2.25 for a 90g pack and will be hitting Morrisons and Asda next month.

Waitrose announced a packed new vegan range, PlantLife. The range is said to include over 25 new items including a Waitrose no Chorizo Tortelloni (£3 for 250g), Waitrose Mushroom Scallop Linguine (£3.50 for 400g), and a frozen Waitrose Seeded Crumbed Seitan Tenders (£2.50 for 200g).

This week’s top launch has to be the new Greggs breakfast items. The high street bakery chain launched 2 new versions of the Vegan Breakfast Roll, The Vegan Bacon and the Vegan Sausage and Bacon. They also released vegan-friendly hash browns, perfect for a quick breakfast on the go. 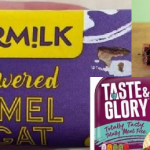